This crumb-topped apple galette tastes just like an apple pie but is so much easier to make. It’s great served with whipped cream or vanilla ice cream. Add a drizzle of caramel sauce for an extra-special touch.

Let’s talk about an apple galette! When I’m in the mood for a slice of homemade apple pie, I often make a galette instead. It’s the perfect size for two people and it tastes just as good. Plus I can get on into the oven in less than an hour. Wins all around.

Why You’ll Love an Apple Galette

You Only Need Five Ingredients to Make an Apple Galette.

What’s the Best Apple to Use for an Apple Galette?

The best apple to use for an apple galette is one that’s sweet and firm, like Honeycrisp or Zestar. If you prefer a tart apple, use granny smith. And if you like a texture more like applesauce, the classic McIntosh apple is what you want.

The Most Important Tool for Making an Apple Galette

To make an apple galette, you need some basic kitchen tools: a way to peel and slice apples, a mixing bowl, and a sheet pan. But there’s one thing that’s really important: parchment paper. Placing a sheet of parchment paper onto the baking sheet keeps the galette from sticking to the pan. And it makes cleanup a snap!

How to Assemble and Bake an Apple Galette

How to Handle Galette Crust. Tips for Success

You can use either homemade pie dough or store-bought pie dough for this galette. Whichever you use, here are some tips for working with the dough.

What to Serve with an Apple Galette

Many times, I’ve simply cut myself a slice of warm galette and eaten it standing up in the kitchen. It’s that good. But if you prefer to add a little somethin’ somethin’ to your galette, I get that!

The classics combinations are a dollop of whipped cream or a scoop or vanilla or caramel ice cream. However, there’s no need to stop there. You could top a slice with a little creme fraiche. It’s rich and creamy and pairs really well with the flavors of apple galette. Or drizzle a little caramel sauce over the slice and call it day. 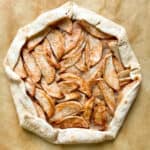 Easy apple galette made with pie dough, sliced apples, cinnamon, and sugar. It tastes just like an apple pie but is so much easier to make! Great served with whipped cream or vanilla ice cream.

Optional, for the crust