Here’s how to make cinnamon rolls from a can of crescent roll dough. It’s easy (and they taste better than canned cinnamon rolls!)

How to Make Cinnamon Rolls from Crescent Dough 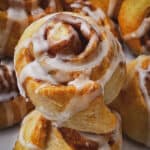 For the Cinnamon Rolls

Brown Sugar. Use either light or dark brown sugar for this recipe.

Cinnamon. For the best flavor, make sure your cinnamon isn’t expired. It should have a lovely cinnamon scent when you open the jar. If it doesn’t, the cinnamon rolls won’t have a cinnamon-flavor.

Crescent Dough. Use crescent dough sheets or a can of crescent rolls. If using crescent rolls, pinch together at the seams before brushing with butter.