What is a Jammy Egg?

A “jammy” egg is a fairly new term for what’s basically a soft-boiled egg. It’s cooked in the shell, like a hard-boiled egg, until the white is firm and the yolk remains liquid.

How Long Should I Cook a Soft-Boiled Egg?

Five Minutes: Very soft egg white and a liquid yolk. This makes an egg that’s almost too soft to cut in half. If you like a very soft egg, this is the cooking time for you.

Six Minutes: Firm egg white and a runny, slightly thickened yolk. The entire yolk remains liquid. This is the most popular cooking time for ramen-style eggs.

Seven Minutes: Firm egg white, similar to a six-minute egg, with a thickened runny yolk. The yolk almost resembles a sauce. When cooked for seven minutes, the edge of the yolk sometimes sets. This is my favorite cooking time for eggs that I want to put on a salad or eat as a snack.

Questions You Might Have About Making a Soft-Boiled Egg

Can I use cold eggs from the refrigerator?

Yes. The cooking times are based on cold eggs from the refrigerator eggs.

What size eggs should I use?

The cooking time is based on large eggs. In the United States, this is the most popular size egg and weighs about two ounces (56 grams).

Does the water have to cover the eggs during cooking?

It’s fine if the eggs aren’t fully covered with water during cooking. They are cooked in a pot of boiling water with the lid on. The lid traps steam which helps the eggs to cook. Two inches of water is enough. Just remember to put the lid on the pot while the eggs cook.

Do I have to pierce the eggshell before cooking?

Nope. There’s an old cooking myth that states if you piece an eggshell with a pin, it makes the egg easy to peel. This simply isn’t true. Cooling an egg in an ice bath makes them easy to peel.

What the best way to peel a soft-boiled egg?

After cooking, cool the egg in an ice bath for at least three minutes. Tap the shell lightly on a cutting board. Try to crack it all the way around. Then press the shell, breaking the thin membrane that’s between the shell and the egg white. If you break this membrane, it’s easy to peel the egg.

Some people advise peeling soft boiled eggs under running water. I find this to be a waste of water. Instead, I peel the egg and then rinse it to remove any stuck-on pieces of shell. 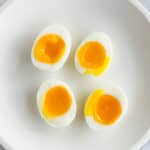 How to Cook Soft-Boiled Eggs

To cook the perfect soft-boiled egg, remember three things. 1. Start the cold eggs in boiling water. 2. Use a timer. Cook for six to seven minutes. 3. Cool immediately in an ice bath.