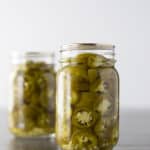 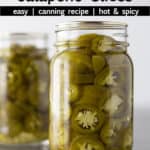 How to Make Pickled Jalapeños 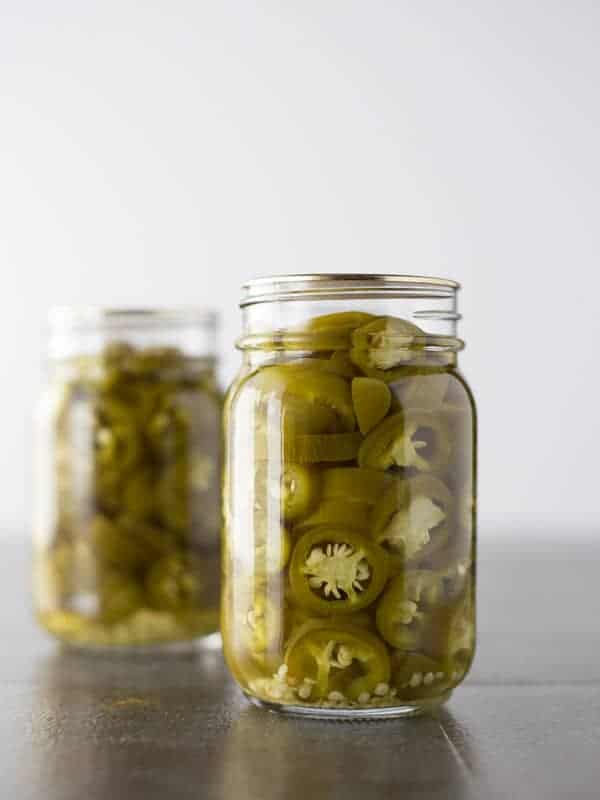 Today we’re talking about canning jalapeños! If you have an abundance of jalapeños coming out of the garden, this recipe is for you. Don’t despair if you don’t grow jalapeños. Find a local grower, buy a pound or so and you’re set to go.

Making homemade pickled jalapeños is easy but it does take some time. Here are the 10 basic steps.

It depends on the style of “pickling” used. This recipe uses a vinegar brine. They taste hot and spicy with a nice vinegar kick. Naturally fermented jalapeños, which aren’t common,  have a distinctly different flavor. They’re pungent and taste strongly of pepper. If you’ve ever purchased pickled jalapeños at the store, chances are you’ve enjoyed a vinegar-brined pepper.

Use firm, unbruised peppers. Discard any peppers that show signs of mold. Clean all peppers thoroughly to remove dirt before canning.

Can You Use Jalapeños with Lines (Striations) On Them?

Yes! Homegrown peppers often have lines on them. These striations are normal and usually indicate a hotter pepper. As long as the pepper is firm with no mold, it’s safe to use.

Can You Use Red Jalapeños? 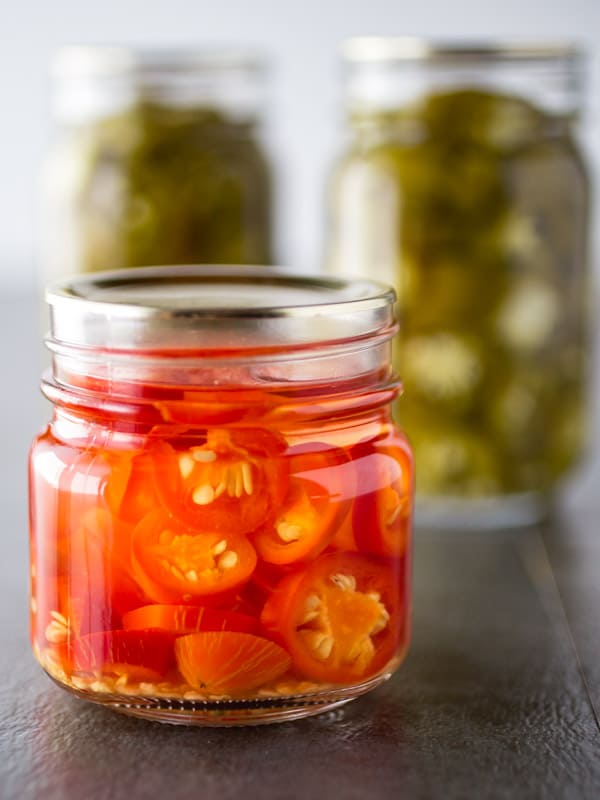 Yes! Fully ripe jalapeños turn red. They are hotter than green jalapeños peppers and work great for pickling. Each year a few dozen jalapeños get away from me in the garden and turn red. When pickling, I make a jar or two of just red jalapeños because….I like the way the look. Again, be sure to only use peppers with no signs of spoilage.

How to Make Brine for Pickled Jalapeños

The brine for this recipe is simple to make. For one pound of jalapeños, combine three and a half cups of white vinegar and one cup of water. If you want, add one tablespoon picking salt and bring the mixture to a boil. (The pickling salt keeps the canned jalapeños from turning cloudy. If you don’t want to buy a box of canning salt, you can use Kosher salt. Just expect a cloudy appearance in your jars.) Adding salt is optional but it adds a nice flavor.

As with all canning recipes, don’t adjust the brine. Peppers are low in acid. The ratio of vinegar to water keeps you safe. Use a vinegar that contains 5% acidity.

How to Pack the Jars

After heating your clean pint jars, it’s time to pack them. Notice I said “pack”. You really want to get as many pepper rings into the jar as you can. Of course, take care not to overly force the slices into the jar–there’s no need to crush or bruise them.

After adding as many slices as you can, use a clean chopstick to poke the slices down. You can often get an extra handful or so of slices into the jar after poking them down with a chopstick.

How to Make Pickled Jalapeños Crisp and Crunchy

One of only problems with homemade pickled jalapeños is they can turn out mushy. No one wants a mushy pepper! To keep the pickled jalapeños crisp and crunchy, use Pickle Crisp by Ball or Mrs. Wage’s Xtra Crunch. Both products are calcium chloride, which is a type of salt that keeps canned produce firm, among other things.  To use, add 1/4 teaspoon per pint to keep the peppers crisp.

I didn’t use pickle crisp one year. (To be honest, I was being lazy. I didn’t want to run out and buy a jar.) That year, we ate peppers that tasted amazing but were mushy. The next season, I bought the pickle crisp. It made a huge difference! If you want crisp jalapeños peppers, get yourself a jar.

How to Make Pickled Jalapeños Less Hot and Spicy

Some folks ask how they can make their pickles jalapeños less hot and spicy. I hate to be the bearer of bad news here but…the level of heat and spice depends on the peppers themselves. You can try slicing the peppers in half and removing the seeds. This tends to reduce the heat level. However, expect your peppers to still be hot. This step takes a bit of time and, since you’ll need to slice the peppers in half to de-seed, you won’t get round rings.

How to Use Pickled Jalapeños

My answer to this is on everything! Seriously, I love these things so much. A better answer is that you can use pickled jalapeños on tacos, burrito bowls, nachos, pizza, or any place you want a little heat.