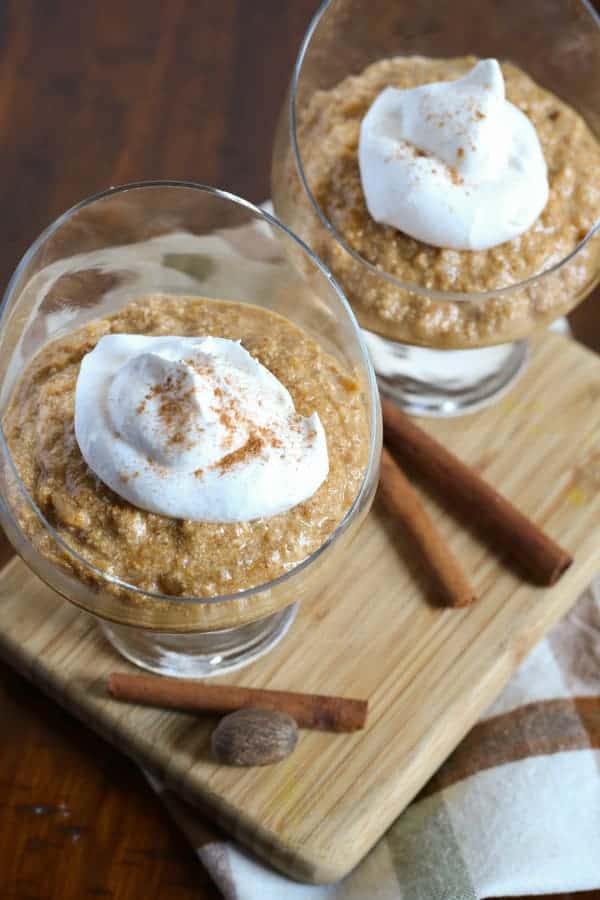 File this under “why didn’t I think of this sooner?!” I mean, really!  I love rice pudding and I love pumpkin pie. Put the two together and…OH MY! You have my new-favorite fall dessert.

Rice is the most important ingredient in rice pudding. It affects both the texture and flavor of the final pudding. For a classic textured pudding, use long-grain white rice. If you’d prefer a creamy, risotto-like rice pudding, use a medium or short-grain rice. This rice is often labeled “sushi rice” or arborio rice. To be honest, I can’t suggest one over the other. I go back forth between the two because I like them both.

While it’s fine to use any white rice you like, even the fragrant jasmine or basmati rices would work, there are two kinds of rice you want to avoid: instant rice and brown rice. The instant rice turns to mush when cooked under pressure and the brown rice would end up crunchy since it requires a much longer cooking time than white rice. “A longer cooking time?” I hear you say! “Then I’ll just increase the time!” Not so fast. An increased cooking time leads to one thing: scorched milk. So no brown rice for this recipe.

To make this pudding, combine whole or 2% milk in the bowl of an electric pressure cooker. (Don’t use half and half or heavy cream. Those two kinds of milk tend to curdle.)

Add brown sugar and turn on the saute setting. This warms the milk and dissolves the sugar. It takes about two minutes. During this time, stir the milk constantly with a wooden spoon. You’ll know when the sugar has dissolved because the milk turns a light beige from the sugar.

Add the rice and give it a stir. Then lock the lid and cook under high pressure for 10 minutes.

When the cooking time completes, turn off the pressure cooker but do NOT release the pressure. You want the pressure valve to drop on its own. This takes about 20 minutes. Keep your eye on the pot. It won’t beep or do anything else to alert you that the valve dropped. I usually set a timer so I remember to check the machine.

Once the pressure valve drops, it’s time to finish the pudding. Whisk an egg together with one cup of pumpkin and pumpkin pie spice. When you combine the egg with the pumpkin, it won’t scramble when it hits the hot pudding.

Turn the saute setting on again and cook the pudding, stirring constantly, until it thickens. This takes about three minutes.

As soon as the pudding is thick, pour it out of the pot into a 9 x13 baking dish. If you leave the pudding in the hot pot, the bottom overcooks and gets curdled. (Ask me how I know!)

Serve the pudding warm or chilled. 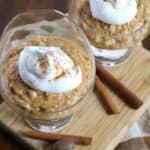