This easy pie combines two great desserts: banana pudding and pie! The filling only takes a few minutes to make. But you’ll want to chill the pie for a few hours to let the Nilla wafers soften.

Table of Contents hide
Five Simple Ingredients (plus a crust!).
How to Make Banana Pudding Pie.
How to Store. (Yes. The bananas turn brown. It’s okay!)

Five Simple Ingredients (plus a crust!).

Pie Crust. This pie tastes best with a cookie-crumb crust, like a graham cracker or Nilla wafer. If you bake your own crust, let it cool completely before filling.

Instant Pudding. Two boxes of instant pudding are the key to this quick filling. The filling doesn’t set if made with cook and serve pudding. Use either vanilla or banana-flavored instant pudding.

Milk. Whole milk or 2% milk make the best filling. Nonfat milk or dairy-free milk, like oat or soy, can produce a watery pie.

Heavy Cream. The secret to this pie is whipping heavy cream right into the pudding mixture. It makes the filling light and fluffy. Use either heavy cream or whipping cream. Light cream does not whip up as light.

Ripe Bananas. Ripe bananas, over-ripe, are what you want for this pie. If the bananas are too ripe, they get unappetizingly soft in the filling. (If you’ve got really ripe bananas, make a batch of brown sugar banana bread.)

Nilla Wafers. Taking a nod from banana pudding, this pie includes Nilla wafers in the filling. After sitting in the pudding for a few hours, they get nice and soft. You can put them in whole or break them up.

Whipped Cream or Whipped Topping (optional). A layer of whipped cream or whipped topping makes a nice topping for this pie. If you make your own, you’ll need about one cup of heavy cream. Whip it with powdered sugar and vanilla extract until thick and stiff.

How to Make Banana Pudding Pie.

How to Store. (Yes. The bananas turn brown. It’s okay!)

Store leftover pie covered in the refrigerator for up to three days. Just so you know: the bananas darken. I tested this recipe with banana slices that I coated in lemon juice before adding to the pie. They still turned brown and the pie had a weird lemon flavor. 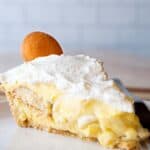 For the Topping, optional

Nilla Wafers. If you want, break up a few of the cookies before stirring them into the filling.

Chill Time. It’s important to chill the pie for about four hours before serving. Doing this gives the cookies time to soften.