Instant pudding makes it easy to make this pie. Inspired by the flavor of peppermint bark, this pie will quickly become a holiday favorite!

If you love fluffy pies, try my recipe for easy chocolate mousse pie.

Can I use regular pudding?

I haven’t tried this recipe with cook and serve or homemade pudding. 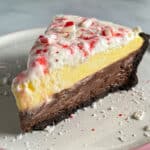 For the Chocolate Peppermint Layer

For the Vanilla Layer

Pudding: Use instant pudding for this recipe. Cook and serve pudding doesn’t work.

Crushed Candy Canes. A few crushed candy canes are a lovely topping. If you don’t want to use something crunchy, crush a few Oreos and sprinkle over the pie.