Zuppa Toscana—the sausage and kale soup made famous by the Olive Garden—is easy to make in the Instant Pot.

After I posted a recipe for Instant Pot Olive Garden’s Pasta e Fagioli, several folks asked if I had a recipe for Zuppa Toscana. I didn’t.

Not only didn’t I have a recipe, I’d never eaten the soup! Thank god for takeout. I ordered a bowl and I was…surprised.

I expected the soup to be thick, like clam chowder. It wasn’t. The broth is thin, almost like chicken soup, with a hint of dairy. It quickly became one of my family’s favorite soups.

Like the pasta e Fagioli, it’s easy to make in the Instant Pot.

How to Make Zuppa Toscana in the Instant Pot 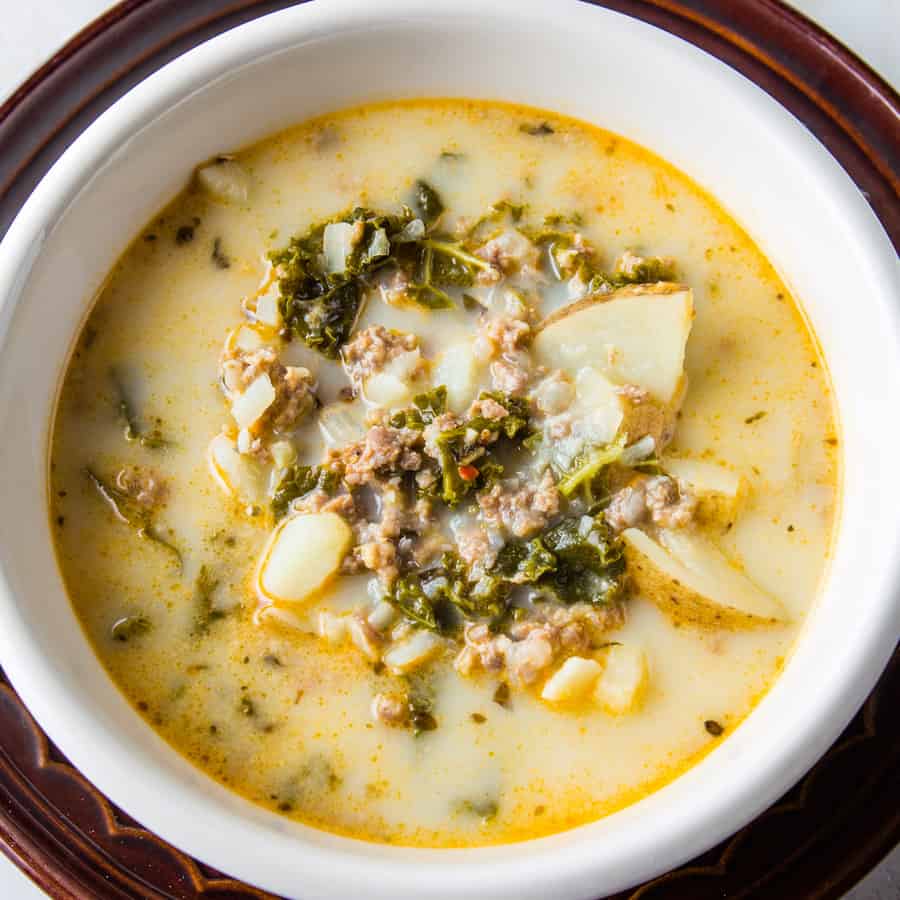 How to drain fat from the Instant Pot.

Don’t have a grease strainer? Tilt and Spoon! With a potholder, lift the insert out of the instant pot. Place it on a heat-proof surface. Push all the cooked sausage to one side of the pot. Tilt the pot. Spoon out the grease with a ladle or place a paper towel into the bottom of the pot to absorb the grease.

Can I replace the kale with spinach?

Yes. However, since spinach cooks so quickly, add it to the soup along with the half and half. Don’t add it to the pot before cooking or you’ll get mush.

Yes! As always, check all the ingredients to ensure they don’t contain any gluten ingredients.

Can you freeze Zuppa Toscana?

To safely freeze soup, first cool it completely. The safest way to do this is to place the pot in a sink filled with ice water. Stir occasionally until the soup is cool.

Once the soup is cool, ladle into quart or gallon freezer bags or containers. Label. The soup keeps frozen for about three months.

The night before you’re ready to serve, place the soup in the refrigerator to thaw. Reheat over medium-low heat.

How do you reheat Zuppa Toscana?

Place the leftover soup in a small pot and heat over medium-low heat. Stir occasionally.

What to serve with Zuppa Tuscana

This soup rich and hearty soup makes for a filling meal all on its own.
Serve with
Hearty Italian bread or breadsticks.
Green Salad 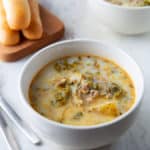