Puff Pastry cinnamon rolls are sweet, crunchy, and really easy to make. Simply top thawed puff pastry with melted butter and cinnamon-sugar. Roll up and cut into pieces. Bake the rolls until brown and then drizzle with a powdered sugar glaze.

Make the cinnamon sugar. Stir together granulated sugar and cinnamon. If you buy premade cinnamon-sugar, go ahead and use it.

Roll out the pastry. Dust your counter lightly and roll out the puff pastry a little. You want it about 12×10-inches. If you don’t roll it out, the rolls are too thick, instead of light and crunchy.

Spread on butter. A light coating of melted butter helps the cinnamon-sugar stick to the pastry. If the butter sets when you brush it on, don’t worry. The sugar will still stick to it.

Roll into a log. Starting with the longest end, roll the pastry into a pinwheel. Try to keep it as tight as possible. That’s what makes the pretty spiral.

Bake until brown. Place the cinnamon rolls on a parchment-lined baking sheet and bake until golden brown. Sprinkle a little extra cinnamon-sugar onto the top of each bun.

Drizzle with vanilla icing. A light drizzle of glaze is a nice way to finish the rolls. Simply stir together powdered sugar and milk. Mix until smooth and then drizzle over the cooled rolls.

Honey Butter. Spread the pastry with honey butter before sprinkling on the cinnamon sugar.

Jam. Replace the butter and cinnamon sugar with jam or marmalade.

Dried Fruit. Add dried fruit, like cranberries, cherries, or raisins, to the filling.

Nuts. Sprinkle chopped nuts, like walnuts or pecans, over the cinnamon-sugar before rolling. 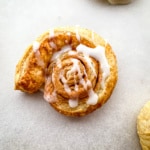