It’s quick and easy to turn a bag of frozen Brussels sprouts into a tasty side dish. Thaw them and saute with a generous amount of chopped onion and black pepper. When cooked this way, they turn out brown and crispy, not soft and mushy. (And there’s no need to roast them!)

Steamed and served straight from the bag, frozen Brussels sprouts can turn out bland and mushy. Who wants that? Thankfully, like with my recipe for frozen green beans, it takes only a few minutes to transform them into a really tasty side dish.

Whole Frozen Brussels Sprouts: This is the classic Brussels sprout in both flavor and size. They’re a little larger than a mouthful. Whole Brussels sprouts are the most common size sold in the freezer section.

Halved Brussels Sprouts: Pre-cut, these Brussels sprouts are a great option. The bag usually states that they’re for roasting. But you don’t need to roast them. When sauteed, they get extra crispy.

Frozen Brussels sprouts have one drawback: they tend to be soft in the center. While we can’t completely prevent this, we can minimize it. Take a minute to thaw them before adding them to the skillet. This helps with the texture because they cook evenly in the skillet.

How to Thaw Frozen Brussels Sprouts in the Microwave.

Many brands can be microwaved right in the bag. Follow the directions for how to do this. If you prefer to thaw them out of the bag, here’s what to do: remove the Brussels sprouts from the bag and place them in a microwave-safe container. Add two teaspoons of water and cover. Heat until the Brussels sprouts are just thawed. They don’t need to be hot.

How to Thaw Frozen Brussels Sprouts on the Stove.

Heat a half-inch of water in a small pot. Add the frozen Brussels sprouts. Cover and cook for about three minutes.

Cook with Onions and Black Pepper

Many recipes for frozen Brussels sprouts call for them to be roasted. This is a lovely option but it takes too long for me. By the time you heat your oven and cook the Brussels sprouts, it’s at least a 30-minute process. By sauting them, you save time and get great-tasting sprouts. Cooking them at a high-temperature crisps the outside and removes some of the water from the sprouts.

How to Saute Frozen Brussels Sprouts

Heat olive oil in a cast-iron skillet or nonstick frying pan. Add finely chopped onion. Cook until the onion is soft, about two to three minutes. Add the thawed Brussels sprouts. Toss to combine with the onions and oil.

Spread Brussels sprouts out in a single layer. Cook without moving for about two minutes. and then give them stir. If they’ve reached the color and crispness you like, you’re done. If not, cook for a few more minutes. I like very dark. So I usually cook for about four to five minutes.

Dark but Not Burnt

Very dark, almost black, spots will appear on the sprouts. This is a good thing! The darker the outside, the more flavorful they turn out.

While you can stop at step three, I never do. I like to add either a shake of Parmesan cheese or some balsamic vinegar to the Brussels sprouts. Both of these enhance the flavor of Brussels sprouts.

There is a slight difference in flavor and texture between fresh and frozen Brussels sprouts. Unlike frozen peas or frozen corn, you won’t confuse frozen for fresh. Due to the water content, they tend to get soft in the center. However, when cooked with onions and sauteed for a few minutes, they are very close to fresh—and take much less time to prepare!

How to Cook Other Frozen Vegetables 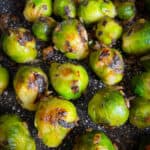