Use the Instant Pot to make quick and tasty shredded chicken. Perfect to use in tacos, on salads, or in soups. 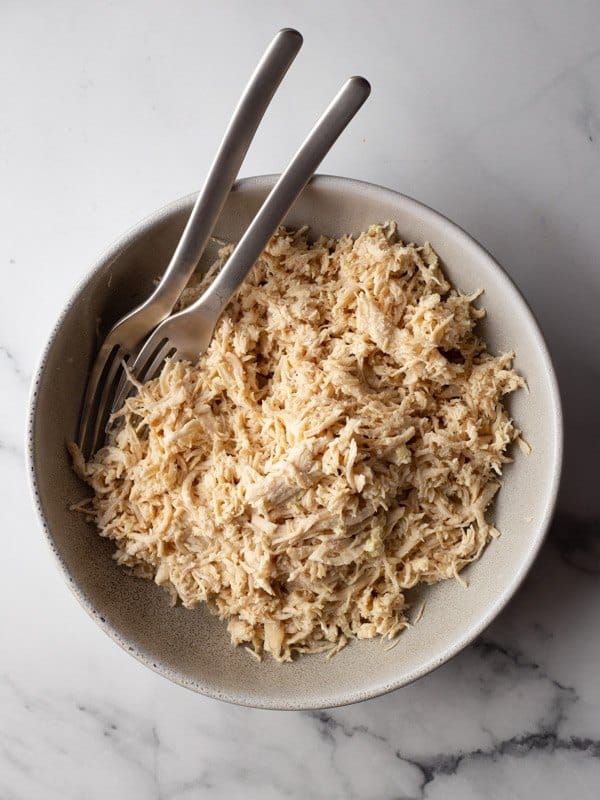 There are many reasons to love your Instant Pot. (Once you figure out how to set it up, of course.) You can make quick chicken burrito bowls,whip up a tasty version of Olive Garden’s Pasta e Fagioli, or make a pot of veggie chili.  But one of my favorite uses for the Instant Pot is…shredded chicken.

I know. I know. It’s not terribly exciting. But, friends, it is. Let me explain.

On nights that I don’t know what I want to eat for dinner, I often make shredded chicken. While the Instant Pot does its thing, I figure it out.

I’ve even used it for quick chicken soup. The uses for shredded chicken feel endless. And, the best part, it doesn’t take long to make.

The reason I can use shredded chicken in so many different ways? Other than salt and pepper, I don’t season it. This allows me to use it however I’d like. If the dish doesn’t have enough flavor to carry the chicken, I add some seasoning after cooking but this is rarely needed.

How to Make Shredded Chicken in the Instant Pot 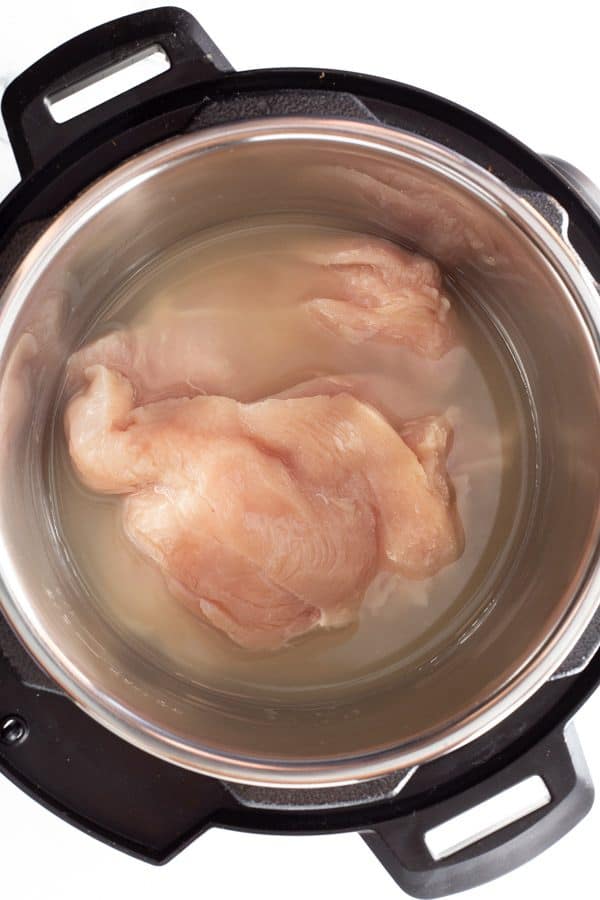 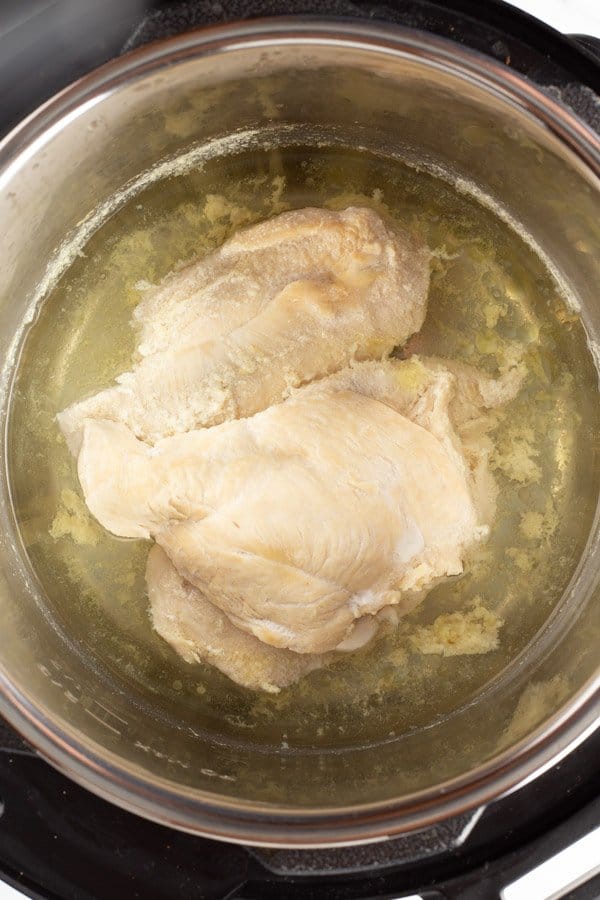 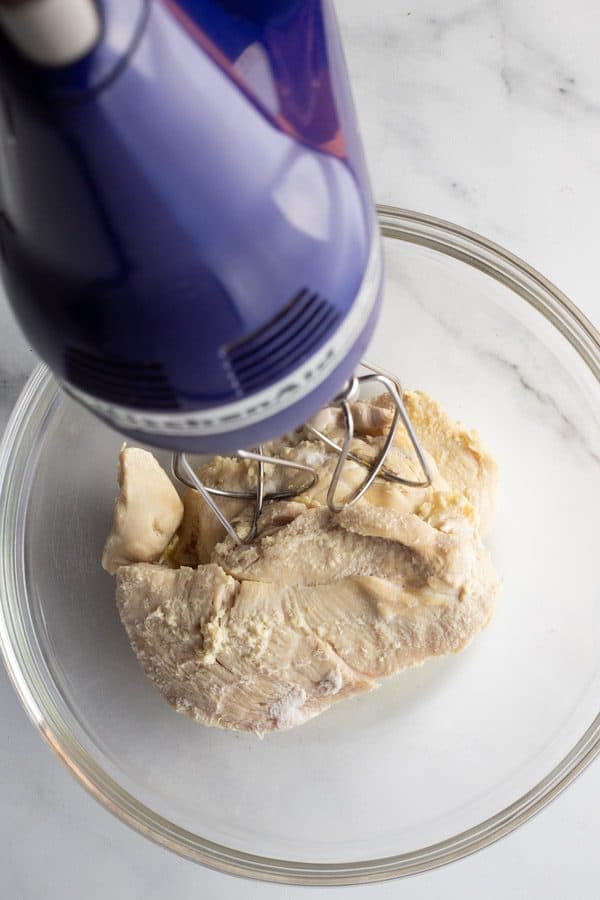 It doesn’t matter! As long as you use boneless, skinless meat, either chicken breasts or thighs work when you’re making quick shredded chicken.

The difference comes down to flavor and texture. Breast meat is leaner and comes out a bit less moist than thigh meat. On the other hand, chicken thighs make for very flavorful shredded chicken. Some folks go with the best of both: they use a combination of chicken breasts and thighs. Win-win!

How do you shred chicken? 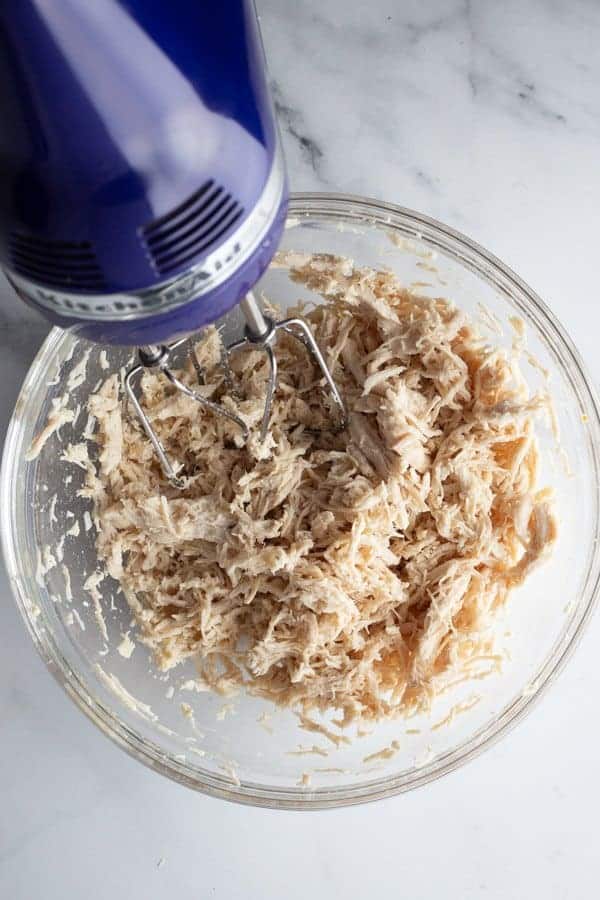 If you own a handheld mixer or stand mixer, it’s time to get it out. While you can shred chicken by pulling it apart with two forks, that method takes forever (or least it feels like it takes forever when you’re hungry). In sharp contrast is shredding chicken with a stand or handheld mixer. This takes seconds. Seriously. Seconds.

Why use the Instant Pot for shredded chicken?

Convenience. You add the chicken to the pot, add some liquid, and cook. You don’t need to watch the chicken or worry about it overcooking and turning out dry.

Notice I said “convenience” and not “speed.” While this method is faster than making shredded chicken in the slow cooker, it’s not a super-fast recipe. The recipe requires a 15 minute cooking time (once it reaches pressure) and a 10-minute natural release.

How long does it take to cook shredded chicken in the Instant Pot?

It takes about 30 minutes, from start to finish, to make shredded chicken in the Instant Pot. 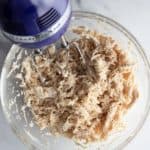 Use the Instant Pot for to make quick shredded chicken. 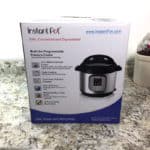