This Pulled Chicken comes together in minutes in your Instant Pot or electric pressure cooker. It’s an easy way to enjoy the flavor of BBQ all year long! 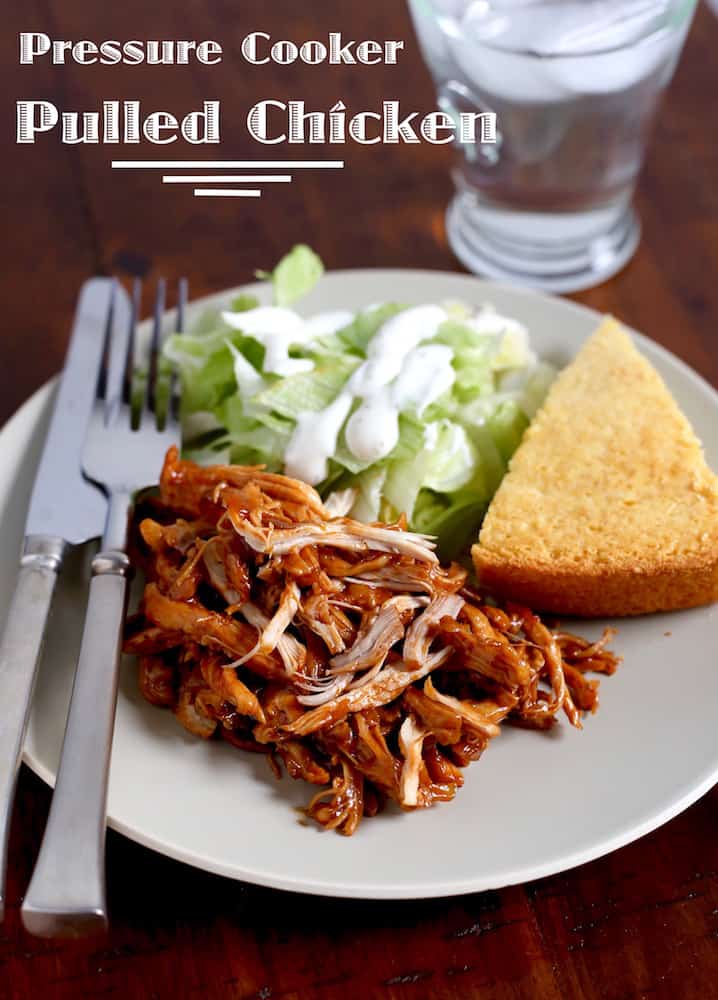 The call came in about 8:30 pm. At first I only heard static. Then my friend’s voice cut through the crackle. “I’m on the train. The connection is bad. Let me ask you, do I really need an Instant Pot? Amazon has them on sale right now.” (It was Cyber Monday.)

You can guess what I said. It went something like: “Yes! Yes! Oh my goodness, YES! Get one right now! You’ll loooooooooove it. LOVE IT.”

The next day she texted me that her daughter requested BBQ Pulled Chicken as the inaugural Instant Pot recipe. This sounded good to me. It’s an excellent recipe for any pressure cooker devotee and it’s especially nice for beginners. You only need five ingredients and the recipe cooks in fifteen minutes under pressure.

For this recipe, get a package— or two—of boneless, skinless chicken thighs or breasts. They cook up tender and flavorful. But most importantly, they have a great texture for shredding.

This pulled chicken gets cooked right in the barbecue sauce. Use your favorite barbecue sauce. My personal preference is to avoid any brands that use corn syrup because I find them syrupy and sticky. This isn’t always easy. Most brands list corn syrup as the first ingredient. As of this writing, Heintz’s line of Barbecue sauces don’t contain corn syrup. So that’s what I used. (Not a sponsored post. I just like the sauce.)

The thing about barbecue sauce, no matter which brand you use, is that it’s thick. This can cause trouble for a pressure cooker. To reach and maintain pressure, pressure cookers need steam. If the cooking liquid is too thick, sometimes it doesn’t generate enough steam and the pressure cooker doesn’t reach pressure.

This happened to me the first time I made pulled chicken in my Instant Pot. Steam poured out of the valve but there wasn’t quite enough to lift the valve into place. It was really frustrating.

To solve this problem, add a tablespoon or two of water to the barbecue sauce. If your sauce seems really thick, use two tablespoons. The sauce gets thickened at the end of cooking. So don’t worry about adding too much water.

The chicken cooks in fifteen minutes under pressure. When the cooking time completes, release the pressure with a”quick release.” If you do a natural release, the chicken can overcook, making it hard to shred.

Fun fact: meat that’s overcooked in a pressure cooker gets tough, not tender. It’s the opposite of meat in the slow cooker.

Remove the chicken from the pot with a pair of tongs and place them on a plate. Don’t shred the chicken right away. Allow the chicken to rest for about five minutes. This allows the muscle fibers to relax and makes them easier to shred.

Use two forks to shred the chicken. This takes a minute or two but is worth the work.

Place the pulled chicken on a hamburger bun. (Toast and butter the bun if you feel like it.) Serve with coleslaw and oven-baked French fries.

Serve with cornbread (Jiffy makes a great easy-to-use mix) and greens. Sometimes I make collard greens, other times I serve it with a big salad and call it a day. 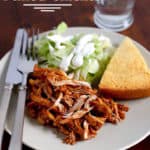 Pressure Cooker Pulled Chicken is quick and easy way to enjoy the flavor of BBQ all year round. Serve on toasted hamburger buns or with a side of cornbread or French fries.

Barbecue sauce tends to be thick and can sometimes cause a pressure cooker not to reach the correct pressure. To solve this problem, add one tablespoon of water to the sauce before using. If your sauce seems especially thick, add two tablespoons of water. The sauce is thickened at the end of cooking. So don't worry about adding to much water.