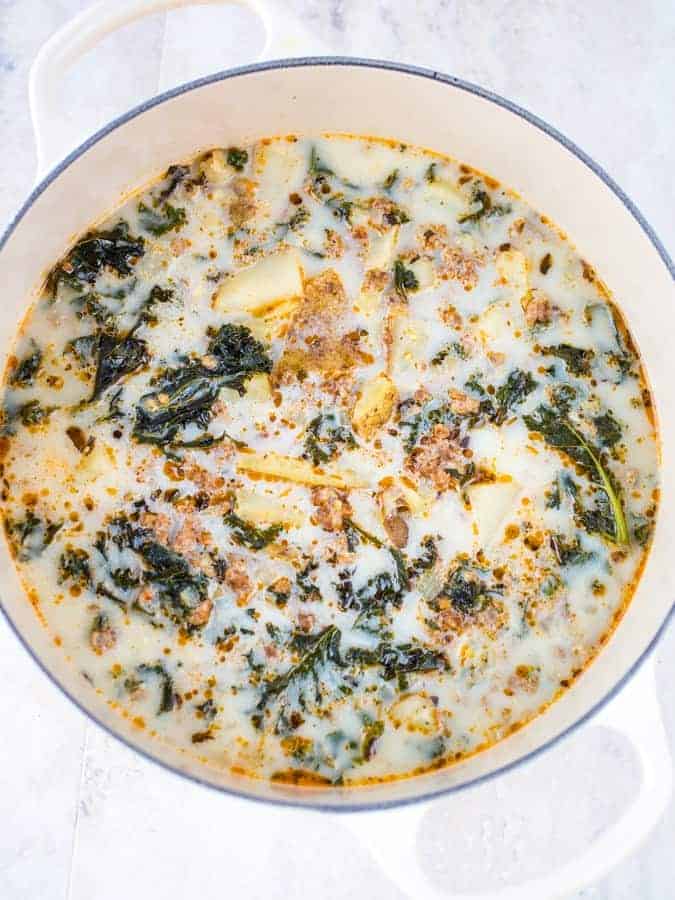 Thanks to this site, I’ve discovered my new-favorite soup: Olive Garden’s Zuppa Toscana. A reader requested the recipe and I was smitten with the spicy sausage and kale soup at first bite.

There was only one problem.

I created the recipe for the Instant Pot.

If you love using an Instant Pot or other countertop pressure cooker, this isn’t a problem. But if you don’t love the appliance or own one, it obviously is.

I realized this yesterday while texting a friend. We were chatting about…the Olive Garden. (yes, really) And she mentioned that she loved their soups. Since I never miss an opportunity to share a recipe, I fired off the links to my Olive Garden copycats: Zuppa Toscana and Pasta e Fagioli.

I thought about our exchange all night. Rachel loves the soup but she doesn’t love her Instant Pot. (She had…let’s call it an experience making my Instant Pot Chicken Burrito Bowls.) It felt ridiculous that I’d created a copycat recipe for her favorite soup made in an appliance that she doesn’t love using. I wanted to fix that.

I headed to the market to buy the ingredients to make the soup. The recipe needed a non-Instant Pot makeover.

There’s only one difference between Zuppa Toscana made in the Instant Pot and it made on the stove: the amount of broth used.

When food cooks in a pressure cooker, none of the liquid evaporates. In fact, for many foods, you end up with more liquid after cooking than before because meats and vegetables naturally give off liquid while they cook. And since the pressure cooker is designed to trap steam, it doesn’t escape.

On the stovetop, some of the liquid naturally evaporates as the soup cooks. The original recipe called for 6 cups of chicken broth. This one uses eight.

How to Make Olive Garden Zuppa Toscana at Home 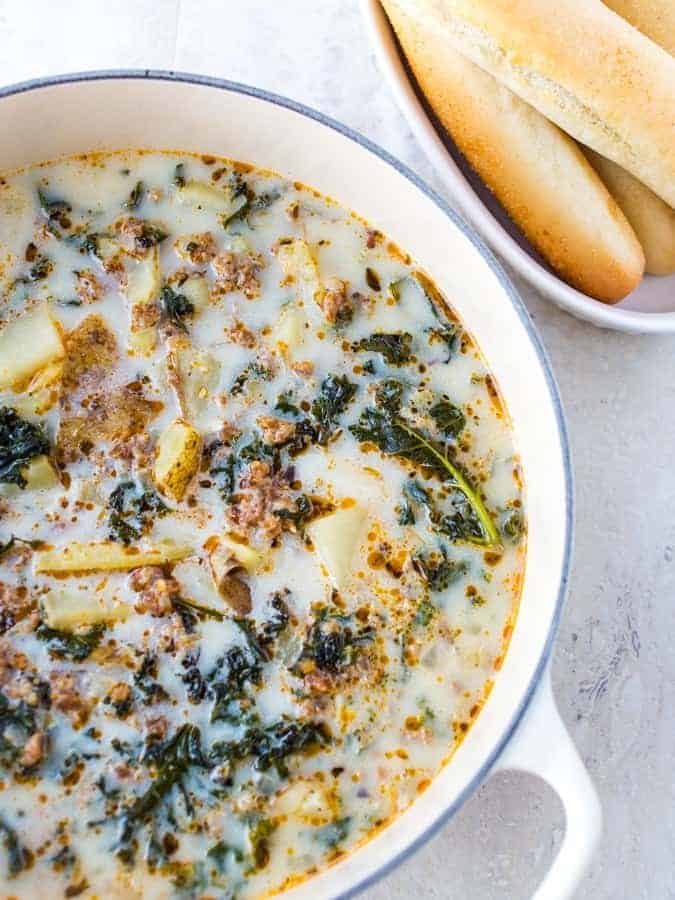 There’s an important step that I want you to know before making this soup: you must skim the fat from the sausage after cooking. This step is so important that I wish I could put it in flashing neon lights. If you don’t skim the fat the soup will turn out unpleasantly greasy.

How to Drain Fat from Sausage

After cooking the sausage, there are a few ways to drain the excess fat.

Use a low sodium Chicken Broth.

My one complaint about the soups served at the Olive Garden is that they tend to be overly salty. When making soup at home, you have control over the amount of salt. I like to use a no sodium broth, like Kitchen Basics. If you use a low or regular chicken broth, don’t salt the soup at first. Between the chicken broth and sausage, there’s plenty of salt in the soup. At the end of cooking, after you added the half and half, adjust the salt to your liking.

If you don’t want to buy a bag of chopped kale, be sure to remove the thick stems from fresh kale before using.

Can I use mild sausage?

You can but…when I tested this recipe with sweet sausage it tasted a bit flat. If you want the soup to taste like the one served at the Olive Garden, use hot sausage.

Can I reduce the recipe?

Yes. Simply divide the recipe in half.

Can I freeze Zuppa Toscana?

The potatoes will break down during freezing. If you’re okay with that, go ahead and freeze the soup. 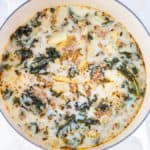 It's important to drain the excess fat from the sausage after cooking or the soup can turn out unpleasantly greasy.